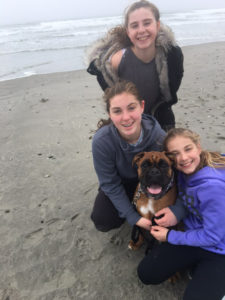 Did you know that including our dog Copper, 83% of the Palys family are female? Did you also know that 82% of the people who work at Dental Associates of Walpole are female? So, growing up in a very male dominated household never prepared me for my current home life, work life and for the purposes of this blog, the love of girls fast pitch softball.

Our town softball season starts with indoor training around March 1st and because it encompasses all softball levels it provides for the much needed basic skills training. Town softball starts in 1st grade and goes all the way through 8th grade and this includes T ball, coach pitch, modified and then full ASA (American Softball Association) rules. Preseason

usually lasts until April school vacation week and then a 10-12 game regular season is played out culminating in a week long double elimination tournament before a champion is crowned the middle of June!

If you really love softball and can't get enough then you're in luck because there are a large number of tournament softball teams in the greater Massachusetts area that travel to different towns and states to play. These teams are highly competitive and usually involve multiple tryouts starting the first week of August and if you're one of the lucky players to make the team then the season gets rolling right after Labor Day. These teams have colorful uniforms and catchy names too like The Rage, Hurricanes, Thunder and Raiders!

Tournament softball teams are broken up into age groups starting at 10U, which means that if you’re 10 or under by January 1st of the given season you can play on that team. So the closer your birthday is to January 1st the luckier you are in regards to softball. The other divisions are 12U, 14U, 16U & 18U.

If you’re fortunate enough to play for a tournament softball team then be prepared! You'll have to sign a contract the binds you to this team for the entire season. It’s expensive-there's a joining fee for the team and quarterly payments throughout the season. Also, outfitting your player with the best softball glove and newest composite bat (and if you played in our family 2 sets of full catcher’s gear too!) It’s time consuming-mandatory practices, usually 90 minutes to 2 hours long, 2 times per week with one practice during the week and one on the weekend. Once tournament play starts plan on playing every weekend all the way until the end of the season-so put those weekend and vacation travel plans on hold!

The Fall softball tournament season usually runs from September to November with weekly practices and weekend tournaments. Tournaments usually mean playing 3 round robin games on Saturday that go toward the Sunday seeding. Games start early and warm-ups happen an hour before game time and since there's always a commute, there's not much time to sleep in on the weekends. When Sunday comes it's win or go home so if you play deep into Sunday that's almost always a very good thing!

Things slow down from November until January before the tournament practices pick up again right up until town softball starts. Once your player gets to the 16U level then High School JV & Varsity softball get started. Overlapping town softball with middle and high school softball while mixing in tournament softball can bring our house to a stand still if we don't stay organized. We then have town and school softball games with practice, then tournament games with practice. The more players we have on different age teams the wilder the schedule is-especially since tournament games might be on the same weekend but they could be at completely different fields and/or towns. It almost always involves one parent going in one direction with one child and one parent going in another direction with another while not forgetting about the dog!

Lastly and most importantly, let’s not forget about academics because if you don’t keep your grades up in our family then you better forget about making softball practice and if you miss practice most coaches aren't happy...

Which brings us back to where we started-with girl power. Hopefully all the studying, hard work, practice, playing games and traveling help discipline and prepare our daughters for most any job that involves hard work and dedication much like you find right here already at Dental Associates of Walpole!