Born and raised in New York, I graduated from Clark University and then received my D.M.D. from Tufts University School of Dental Medicine. Following graduation, my wife Doris (who I met at Clark when we were both eighteen) and I returned to New York where I had been accepted into an oral and maxillofacial surgery residency program.  Upon my completion of my residency and now with two children, we decided to stay in New York and raise our family. I maintained my Tufts connection from afar.

In 2005 I received a call from the Dean of the Tufts University School of Dental Medicine while in my office in New York. He was coming to New York and wanted talk with me about getting more involved with Tufts.

Following a lunch with the Dean, I started making trips to Boston to participate with Alumni activities at Tufts. My wife and I were also fortunate enough to be able to establish a Senior Prize Fund for Pediatric Dentistry in memory of my parents.

In the fall of 2012, our daughter, son-in-law and our two granddaughters relocated to Needham, MA. When my daughter asked for a referral for a pediatric dentist for their children, I called an old friend of mine at Dental Associates of Walpole to give him a “heads-up” about two new “VIP” patients.

As good as life was in New York for us, we decided to relocate to Needham as well. We didn’t want to miss being with our children and our grandchildren as they grew up. And so, began my “Second Act”.

When they found out I was relocating to the area, Dr. John Ficarelli from Dental Associates of Walpole contacted me to ask what I was going to do in Boston. A few weeks later I accepted their offer to work as an oral and maxillofacial surgeon one day a week commencing in 2014.

At the same time, I became an Assistant Clinical Professor at Tufts one day a week. This has morphed into a second and occasional third day as well.

Working at Dental Associates of Walpole for me has been tremendously rewarding at this juncture in my private practice career. I have the opportunity to work with exceptional colleagues, both general dentists and specialists, who are dedicated to providing quality patient care in a truly patient focused environment. This atmosphere is supported by dedicated and compassionate assistants, hygienists and office staff. The interactions and the dynamics of the doctors with each other is the definition of synergism for the ultimate benefit to the patients. For me I feel very fortunate to have been afforded this opportunity. 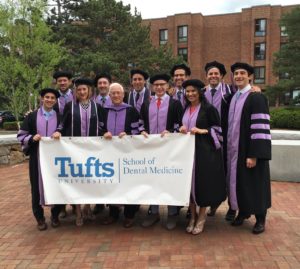 As for my teaching at Tufts, I have to say that it has become the most gratifying thing I have done in my professional career. I interact with both the pre-doctoral students and with my future colleagues, the oral and maxillofacial surgery residents, as both a teacher and a mentor.

Their enthusiasm is inspiring. As I relate to them in clinic and in seminars, learning never stops.

After I relocated to Boston, a patient of mine from New York called to see how I was doing. As we spoke, she explained that she admired those that succeed in having a “second act” and I had made her list. I appreciated her kind words and I gave much of the credit to my wife and our family for their support (not to mention their moving to Needham) and to my colleagues at Dental Associates of Walpole and to my Tufts “connection” for my professional life here in Massachusetts.

Act One was great in New York but Act Two is really a tough act to beat.