My older sister, Kelley, graduated high school and moved to Los Angeles for college in August, 2006. By September she knew something was wrong. She was covered in bruises, her gums were swollen and bleeding, and she was so unbelievably tired. She saw her school physician and was immediately sent to the UCLA Medical Center, where she was quickly diagnosed with biphenotypic leukemia. This means she had simultaneously developed two distinct types of blood cancer: acute lymphocytic leukemia (ALL) and acute myeloid leukemia (AML). Her prognosis was poor, but Kelley had no quit in her. 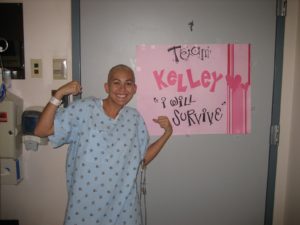 Kelley in her room at the UCLA Medical Center

She needed chemotherapy, total body radiation, and a bone marrow transplant, and she needed them yesterday. Chemotherapy and radiation are truly nasty, especially in combination, but at least they are readily available. Suitable bone marrow, on the other hand, is an extremely challenging thing to find, as the body has an innate and fierce knowledge of what is ‘me’ and what is ‘foreign.’ If the body recognizes something as foreign, the immune system springs into action and sends in the body’s big guns to attack and destroy. On average, only a few people out of every 10 million will have a bone marrow ‘haplotype’ similar enough to the potential recipient to trick the immune system into recognizing it as ‘me.’ The exceptions are siblings, who have a 25% chance of being a match and thus a potential bone marrow donor. Unfortunately, testing revealed I was not a match for my sister, and we have no other brothers or sisters. The search was on. 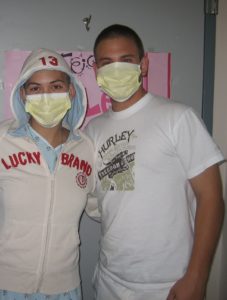 Kelley and I at UCLA Medical Center

In cases such as Kelley’s, the search for a donor turns to the National Marrow Donor Registry: Be the Match, in hopes of finding a suitable bone marrow match and receiving a bone marrow transplant from an anonymous donor. She was lucky; a 33-year-old man, somewhere out there, was a 10/10 “perfect match” for her. When he was contacted by Be the Match, he stepped up to the plate and agreed to donate. Donors are not compensated, they simply have an opportunity to save a life and are selfless enough to come through in somebody else’s moment of need. Kelley received her bone marrow transplant, her second chance at life, on December 6th, 2006. It was a long road, but she roared back to life and left UCLA Medical Center for good in April, 2007. She took full advantage of her second chance, starting college again in August and graduating four years later as valedictorian. 12 years have flown by, and she is now married and pregnant with her first child, a girl. 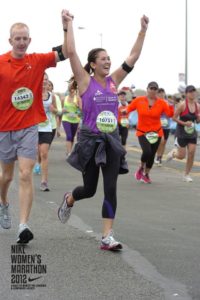 I have remained in the Be the Match registry since my sister’s illness, knowing I could potentially do for another family what my sister’s donor did for ours. In March, 2018 I received a phone call that someone out there had leukemia, and I was their match. Having been on the other side of it all, it was the easiest decision I’ve ever made. I had the privilege to donate bone marrow on May 23rd, 2018 at Massachusetts General Hospital, and it was one of the most fulfilling experiences I’ve ever had.

One year to the day after an anonymous bone marrow transplant, if both parties agree and are in authorized countries, contact information can be released from Be the Match to the donor and recipient. Kelley and her donor have become life-long friends.

Please, please, please become a potential donor in the Be the Match Bone Marrow Registry. Go to bethematch.org to join! All it takes is a saliva cheek swab, and you just may give someone the gift of life.

Kelley with her husband and puppy, 2018