Dentistry on my Mind and in my Blood

My journey to becoming a dentist actually starts as a love story commencing toward the end of World War II. Louis Fisher and Leah Singer met in a Nazi Germany Concentration Camp. Louis Fisher was a dentist in what is now modern day Slovakia while Leah Singer resided in Poland. Meeting in a concentration camp is obviously not ideal but if you can find love there it must be powerful. As a dentist, Louis had a set of skills the Nazi’s found very useful. Without going into much detail, he was able to procure gold for the Nazis making himself valuable which led to better treatment. Taking a huge risk, Louis would steal some of this gold, trade it for food and goods to help others. If you could stay healthy and work, you were less likely to be sentenced to death. Louis exhibited this altruism for the entirety of his time in the camps even though it was risking his own life every time.

One day, Louis met Leah in Muhldorf, a concentration camp. Over time, the two of them fell in love in the most unlikely of places. Who can even imagine thinking about love in a place like a concentration camp? As mentioned earlier, Louis was treated a little better than the other prisoners due to skills he acquired as a dentist. One night, toward the end of the war, Louis’ supervising Nazi approached him and gave him a gun telling him to get as many people out of the camp as he can. The war was ending soon and he was informed that even more prisoners would be murdered before it concluded. Louis approached Leah with this information, and offered to help her escape. Leah explained to Louis he would have to leave without her because her mother was older and would slow them down in the escape jeopardizing the others. Reluctantly, Louis led an escape saving many lives promising to come back for Leah and her mother. This part of my grandfather’s story, his bravery and heroism, inspired me the most and led me to want to emulate him.

The war ended and the Holocaust was over. Louis now had to find the love of his life. He went to all of the recovery camps looking for Leah and her mother. Finally, he found her! They lived in Germany for two years before moving to the United States, eventually settling in Long Island, NY. Louis did not want to go through dental school again, so decided to open a dental lab. Louis and Leah raised two wonderful children, their son becoming a dentist. Their daughter moved to Massachusetts and had two kids of her own, with her son becoming a dentist as well, making him a 3rd generation dentist.

In my mind my grandparents are the most impressive 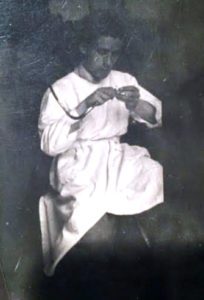 people. My grandmother still lives in Long Island near my uncle, the other dentist in our family. Unfortunately, I never met my grandfather as he passed before I was born. This story along with many others illustrating the amazing and courageous person he was imprinted on me. As I grew up, I looked up to him, wanting to make him proud. He did so much for those around him I felt empowered to ensure helping others was part of my future. Perhaps I will never do this on the same level as he did, but I knew with enough hard work I could help those around me.

In elementary school, instead of wanting to be a firefighter or an astronaut like my classmates, I set out to follow in his footsteps and wanted to be a dentist. As people questioned me about my career choice, I began to realize I did not know as much about the profession as I would like. I decided to take action and turn my thoughts and dreams into a tangible experience. I shadowed my general dentist while still in high school, learning what a dentist truly does on a daily basis. I then broadened my experience by working with my oral surgeon during the summers in college. These internships excited me for the future as well as provided me with the concrete experience I needed to ensure that dentistry was the field for me. The rest is history (no pun intended). I went to dental school and now I have the amazing privilege of being one of the dentists at Dental Associates of Walpole getting to help patients every day.