It is September 22, 2018, a full 6 months late of the self-imposed deadline that I had set to have my project completed and delivered to my granddaughter Charlotte.

Better late than never, but I hate to be late.

It was a cold misty Saturday in November (2017) when I decided to start construction of a dollhouse kit that I had purchased a few years earlier.

All along I had planned to build the dollhouse and give it to my oldest grandchild Charlotte on her sixth birthday (March 2018), when I thought it would be age appropriate. I had completed similar projects for my two daughters when they were 6 and decided it would be nice to continue that tradition.

It didn’t take long to realize that I had bitten off much more than I could chew.

Work at it as I may, there was no way this project would be ready for Charlotte's sixth birthday in March.

I took over a bedroom with all of the supplies, and plunked the slowly developing house in the family room so as to be able to work on it most evenings, snow days, and many hours on the weekends.

By February of 2018, the house was beginning to actually look like a house, but unbeknownst to me, I was making some major mistakes that would set me back many more hours of work as I continued the project. 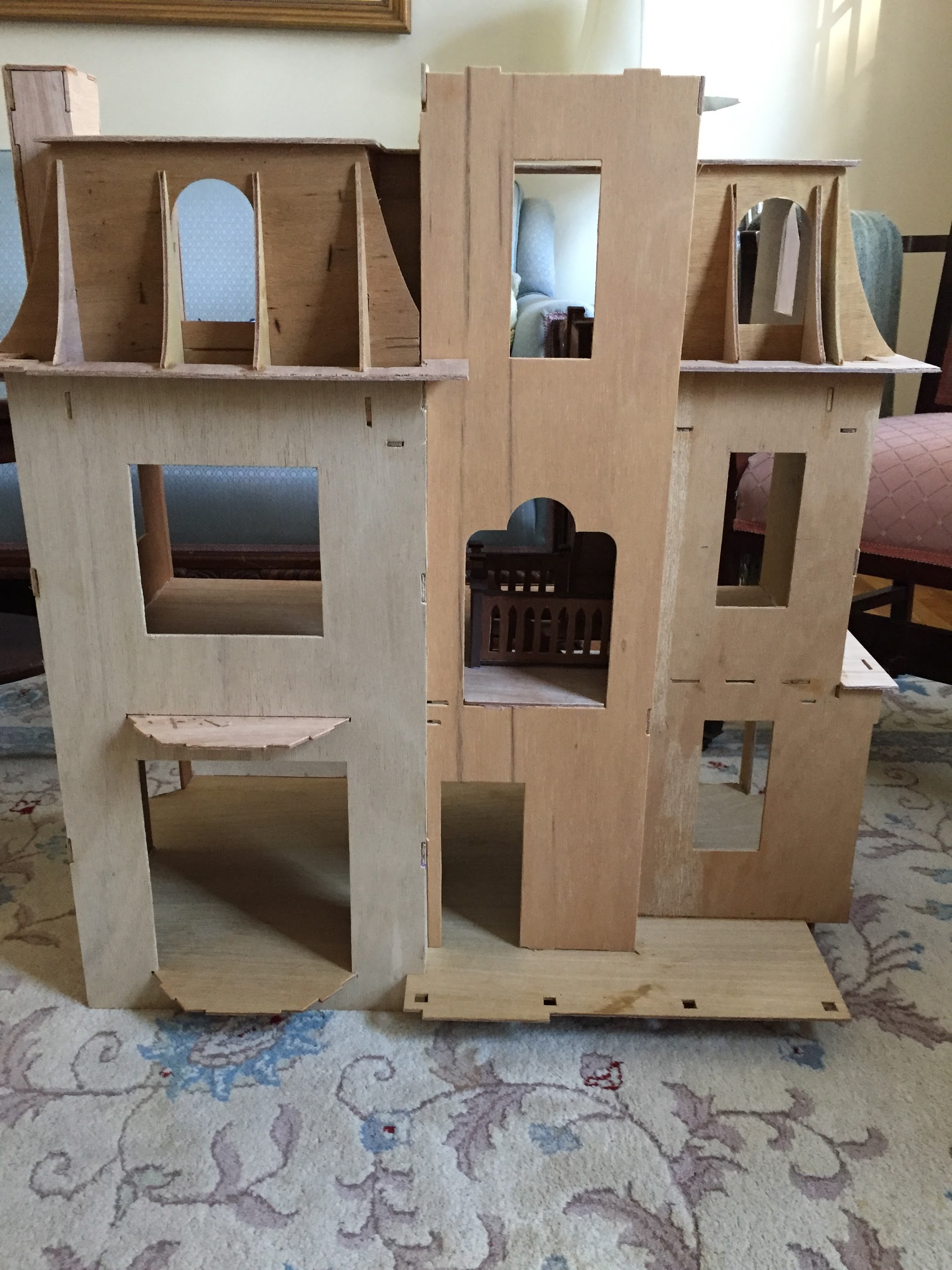 The glue gun was most helpful when applying roof shingles and house siding clapboards one at a time. 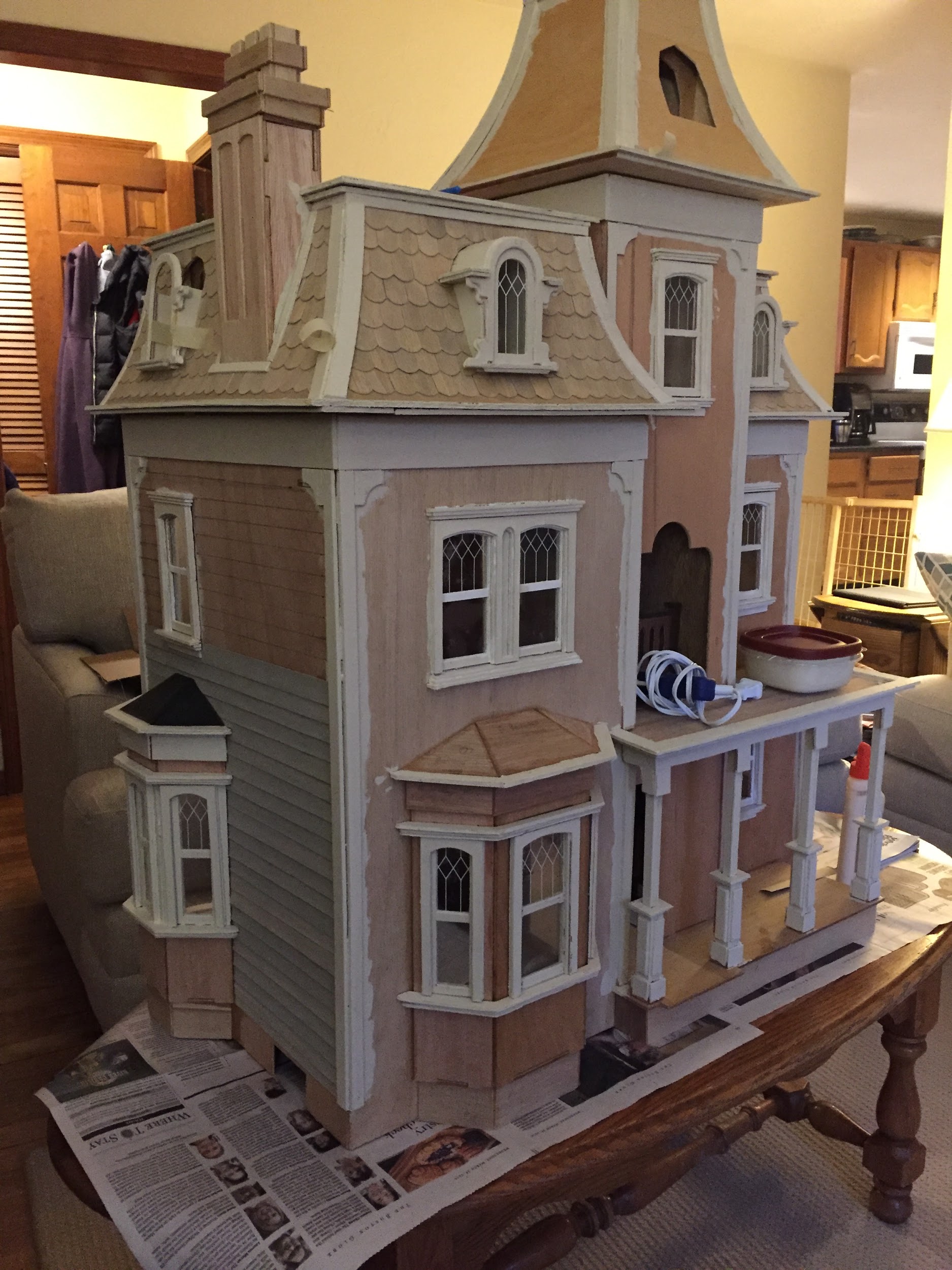 My biggest mistake was a failure to pre-plan interior floor and wall treatment prior to completing the assembly. It would have been so easy to paint ceilings, wallpaper walls and put down flooring as I went along rather than after the house had been completed. I was happy with the end result of the interior but many-many-many extra hours were needed to navigate paint, floors and wallpaper around finished interior window frames and doorways. 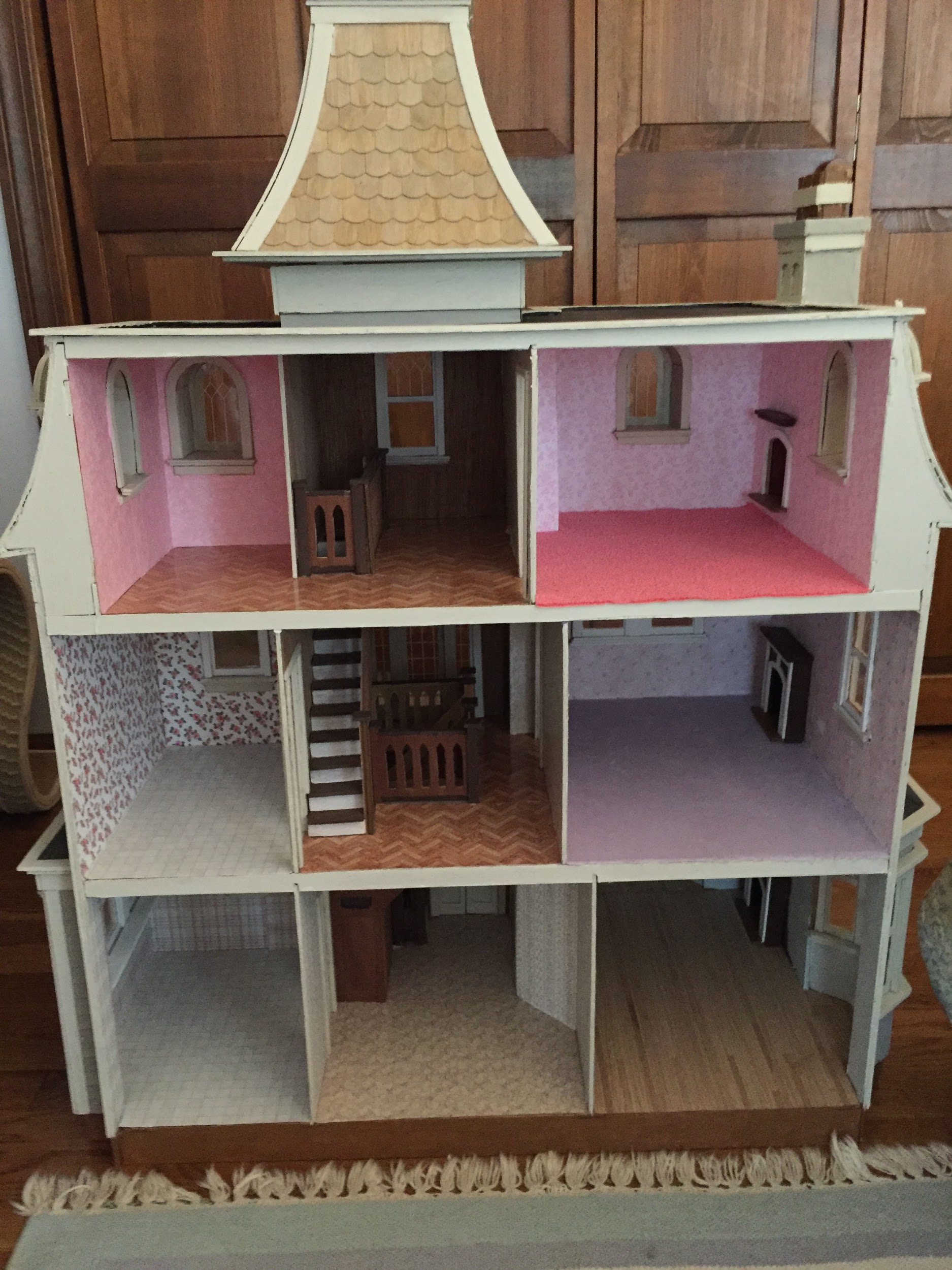 This evening I am going to deliver the house, some furniture and little people to Charlotte. Then it will be time to gather my thoughts, learn from my mistakes and move on to my next project(s). 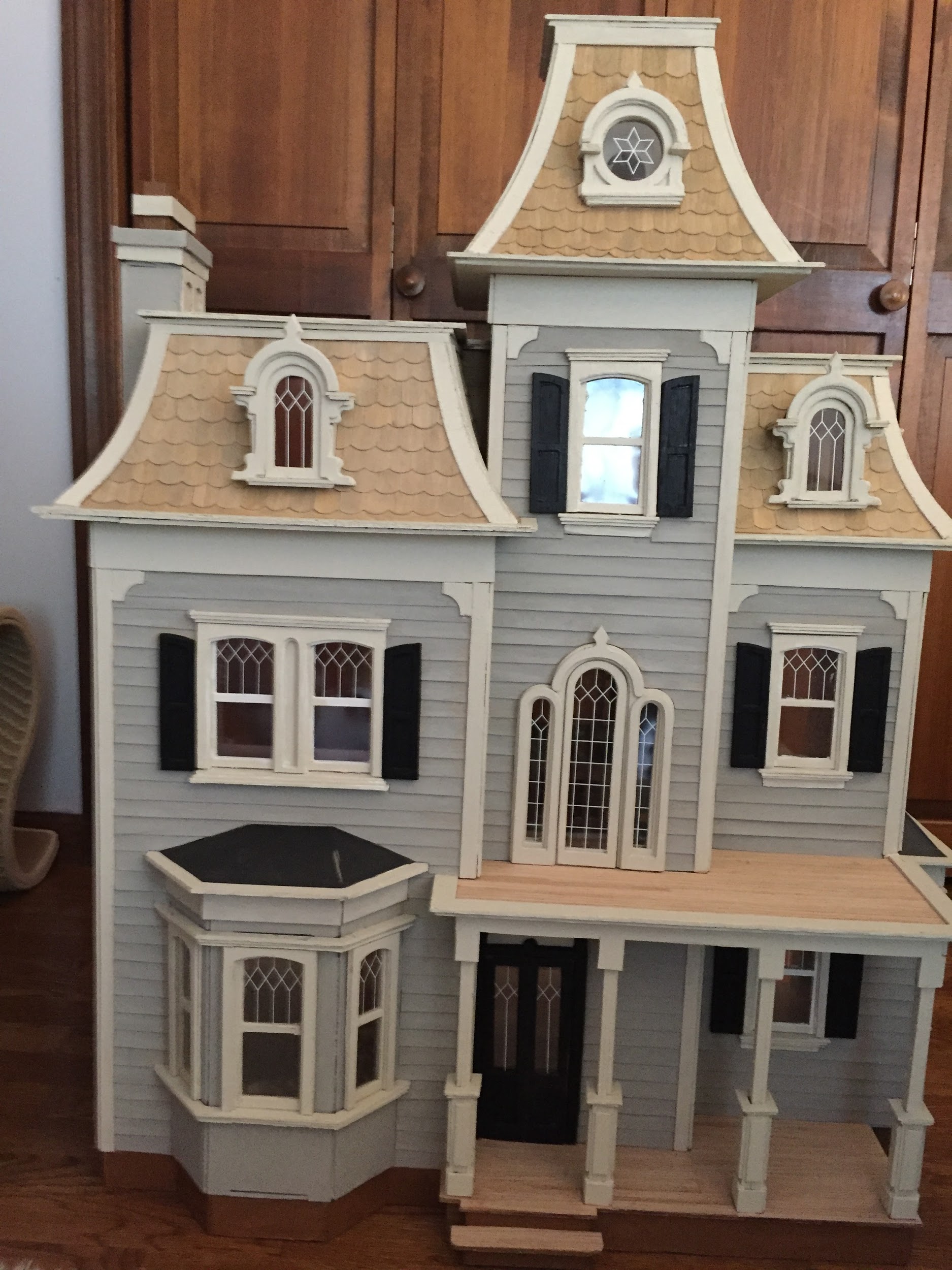 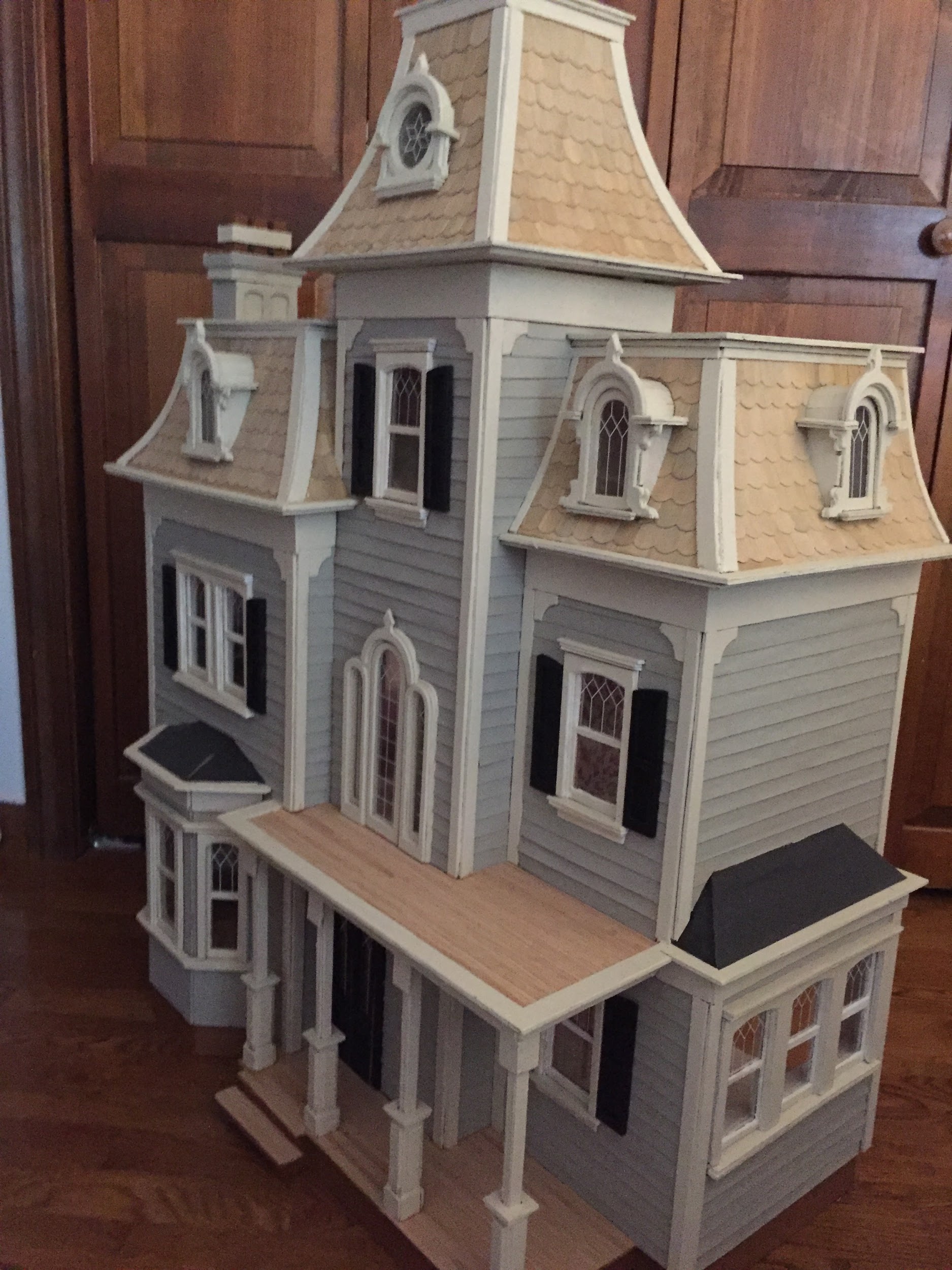 I have six grandchildren and Emily and Nate (already closing in on their 5th birthdays) are next on the agenda. I have decided on another dollhouse and a lighthouse kit as my next projects, which I plan to work on simultaneously as their birthdays are very close together.